Because Book IV represents Grainger’s attempt to deal with the subject of enslaved labor, it contains many passages that purport to be concerned for the welfare of the enslaved. For example, in line 423, Grainger identifies his poetic muse as a “soft daughter of humanity” and then calls on his imagined planter readers to treat the enslaved kindly, promising that such an approach will encourage the worker “By day, by night, to labour for his lord” (427). Grainger was an ameliorationist, meaning that he believed better treatment of the enslaved could lead to increased productivity. Ameliorationists also were in favor of maintaining the system of slavery and believed that it simply needed to be reformed.

In the passages selected below, Grainger specifically appeals to planters to provide their enslaved laborers with greater quantitites of rations or provisions. It was common practice for planters to skimp on providing their workers with enough food, since they wanted to economize on costs and thereby increase their profits. Also, planters tended to rely on imported provisions from Europe and North America for rationing. Although these provisions had to be paid for, planters did not want to take up any land that could be used for sugar cultivation by growing provision crops.

Still, the provision grounds did offer their cultivators some degrees of autonomy. They could, for example, exercise more choice over what they ate since they were growing their own food. Note in the passages below how many of the specific plants that Grainger mentions as growing in the provision grounds had arrived in the Americas from Africa. While it is unlikely that the enslaved themselves were able to carry these plants from Africa–captives were not allowed any possessions on slave ships–slave ships often stocked African crops to feed their captives during the passage across the Atlantic, and the crops them became established in the Americas, where the enslaved continued to cultivate what they had been used to cultivating in Africa. Also note how many of the plants and foodstuffs mentioned by Grainger are plants indigenous to the Americas and long cultivated by Amerindians. The prevalence of these crops, which were often hardy, high-yield staples, suggests that newly arrived Africans engaged in significant exchanges of knowledge with Amerindians and that this knowledge sharing continued to have long-lasting effects well beyond the initial period of contact.

Provision grounds can, in fact, be read as records of the resourcefulness and creativity of their cultivators, who dealt with the poor quality of the lands they were given by learning how to grow plants that others shunned. Although certain plants may have been designated weeds by colonists, the enslaved realized that proper preparation and cooking methods could turn these so-called weeds into valuable sources of nutrition. The dishes prepared by the enslaved in the Caribbean even infiltrated colonists’ cuisine, which became increasingly indebted to Afro-Caribbean ingredients and influences. Colonists also became reliant in certain colonies like Jamaica on enslaved cultivators for most of their own local foodstuffs. Because the cost of importing food was high, they purchased produce from the enslaved, who were allowed to use and accumulate currency. Although it was rare for cultivators to make enough money to purchase their freedom, they were nevertheless able to make money and profit from what is now known as the internal marketing system. The internal marketing system, in turn, has been recognized as providing a crucial foundation for the counter-plantation system that emerged in post-emancipation Caribbean colonies. Those who participated in the counter-plantation system eschewed the model of industrial agriculture represented by the plantation and instead focused on small-scale farming, whether for subsistence or trade and export.

Note: B. W. Higman’s Jamaican Food was an invaluable source of information for many of the notes about specific plants mentioned in this section of the poem. Also see Judith A. Carney and Richard Nicholas Rosomoff’s In the Shadow of Slavery: Africa’s Botanical Legacy in the Atlantic World for more information about Afro-Caribbean provision grounds and cultivation practices. 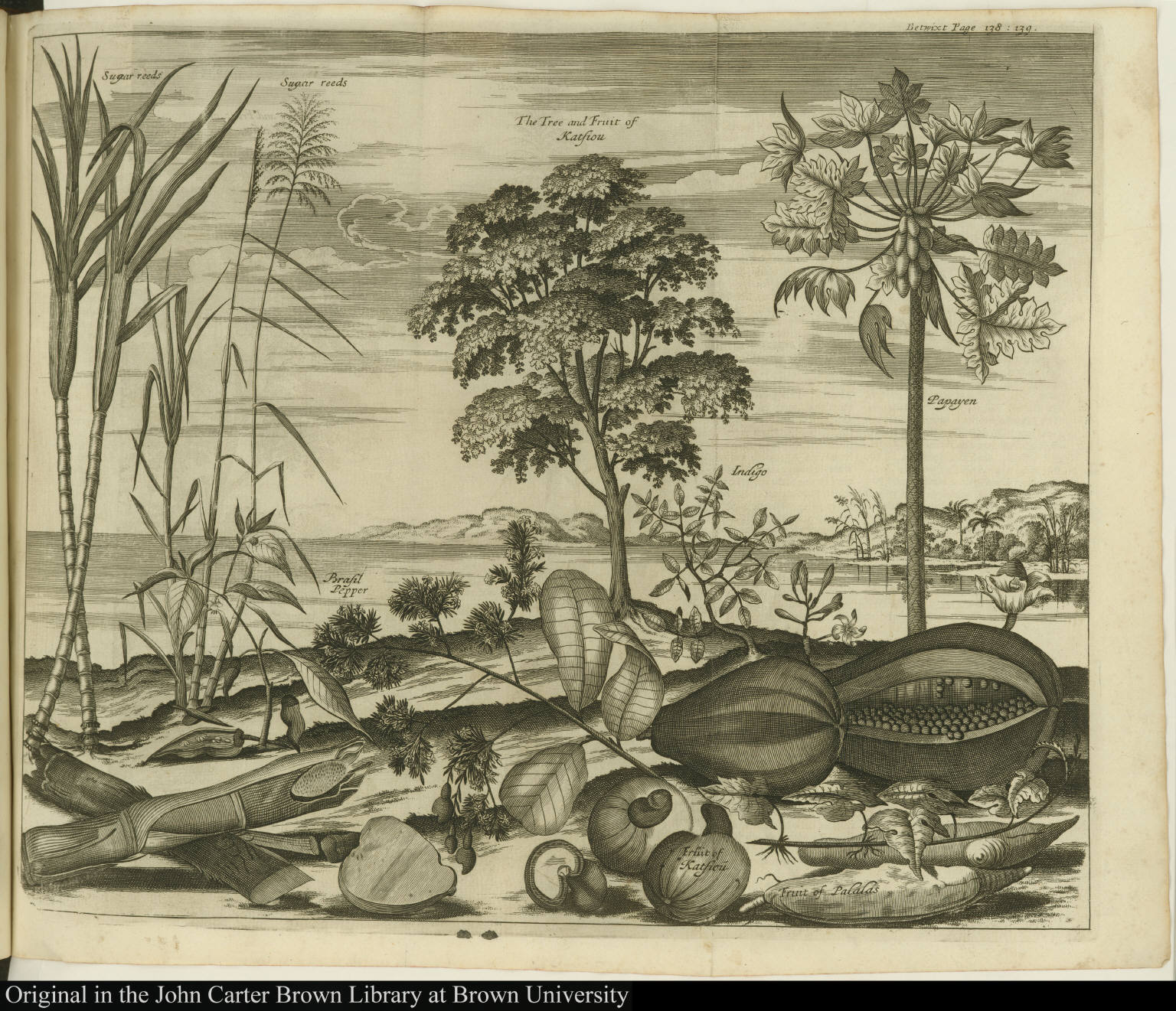 Various plants and fruits from Brazil, including cashews and papayas, engraved plate from A Collection of Voyages and Travels, London, 1704, v. 2, following p. 138.

VER. 449. cassada] To an antient Carribean, bemoaning the savage uncomfortable life of his countrymen, a deity clad in white apparel appeared, and told him, he would have come sooner to have taught him the ways of civil life, had he been addressed before. He then showed him sharp-cutting stones to fell trees and build houses; and bade him cover them with the palm leaves. Then he broke his staff in three; which, being planted, soon after produced cassada. See Ogilvy’s America.11

VER. 454. angola] This is called Pidgeon-pea, and grows on a sturdy shrub, that will last for years. It is justly reckoned among the most wholesome legumens. The juice of the leaves, dropt into the eye, will remove incipient films. The botanic name is Cytisus.

VER. 456. bonavist] This is the Spanish name of a plant, which produces an excellent bean. It is a parasitical plant. There are five sorts of bonavist, the green, the white, the

moon-shine, the small or common; and, lastly, the black and red. The flowers of all are white and papilionaceous;17 except the last, whose blossoms are purple. They commonly bear in six weeks. Their pulse is wholesome, though somewhat flatulent; especially those from the black and red. The pods are flattish, two or three inches long; and contain from three to five seeds in partitional cells.

VER. 457. Ochra] Or Ockro. This shrub, which will last for years, produces a not less agreeable, than wholesome pod. It bears all the year round. Being of a slimy and balsamic nature, it becomes a truly medicinal aliment in dysenteric complaints. It is of the Malva species. It rises to about four or five feet high, bearing, on and near the summit, many yellow flowers; succeeded by green, conic, fleshy pods, channelled into several grooves. There are as many cells filled with small round seeds, as there are channels.

VER. 459. potatos] I cannot positively say, whether these vines are of Indian original or not; but as in their fructification, they differ from potatos at home, they probably are not European. They are sweet. There are four kinds, the red, the white, the long, and round: The juice of each may be made into a pleasant cool drink; and, being distilled, yield an excellent spirit.18

VER. 461. eddas] See notes on Book I. The French call this plant Tayove. It produces eatable roots every four months, for one year only.

VER. 462. Indian cale] This green, which is a native of the New World, equals any of the greens in the Old.

VER. 462. calaloo] Another species of Indian pot-herb, no less wholesome than the preceding. These, with mezamby,19 and the Jamaica prickle-weed,20 yield to no esculent21 plants in Europe. This is an Indian name.