Book III mainly focuses on the harvesting and processing of sugarcane and frequently portrays it as an easy and even enjoyable process. For instance, Grainger writes about “mills [that] dance eager in the gale” and describes the enslaved laborers singing cheerfully while working in the fields (165). He also claims that enslavers treat the enslaved so well that manumitting or freeing the enslaved would be the equivalent of “desert[ing]” them (172).

Yet the lines excerpted here also show that Grainger could not always avoid acknowledging the extremely dangerous and fatiguing conditions under which enslaved Africans had to work. The laborers had to cut the sugarcanes into “junks a yard in length” and then tie them into “small light bundles” (127-128). They then had to hand-feed the stalks of cane into the mill. This was a process that sometimes resulted in horrific accidents, as limbs could easily catch in the mill’s cane-crushing rollers. As you read the lines in which Grainger describes such an incident, think about how Grainger describes what happens and whether the lines maintain or contradict Grainger’s fantasy of happy slavery.

Also pay attention to Grainger’s descriptions of the laborers he calls “boilers.” Boilers had to watch over the giant vats or “coppers” in which the crushed sugarcane was boiled, reduced to a syrup, and then crystallized into solid sugar. Working in the boiling house was one of the most difficult and fatiguing jobs on the plantation because the boilers were dealing with heavy equipment and high temperatures. Nevertheless, because boilers also were highly skilled—they had to know exactly when the sugar had boiled enough and was ready to crystallize—they were the laborers that planters depended on the most. Indeed, even though planters and overseers often made a show of supervising the crystallization of cane, they had to rely on the expertise of the boilers, who therefore were sometimes able to extract concessions from their enslavers. As such, when you read these lines, also think about how the boilers are portrayed and whether Grainger acknowledges their special status. Does Grainger ever point to the centrality of the labor performed by the enslaved?

Note: For further reading about the portrayal of labor and slavery in eighteenth-century georgic poetry, see Markman Ellis’s chapter on “‘Incessant Labour’: Georgic Poetry and the Problem of Slavery” in his book Discourses of Slavery and Abolition. 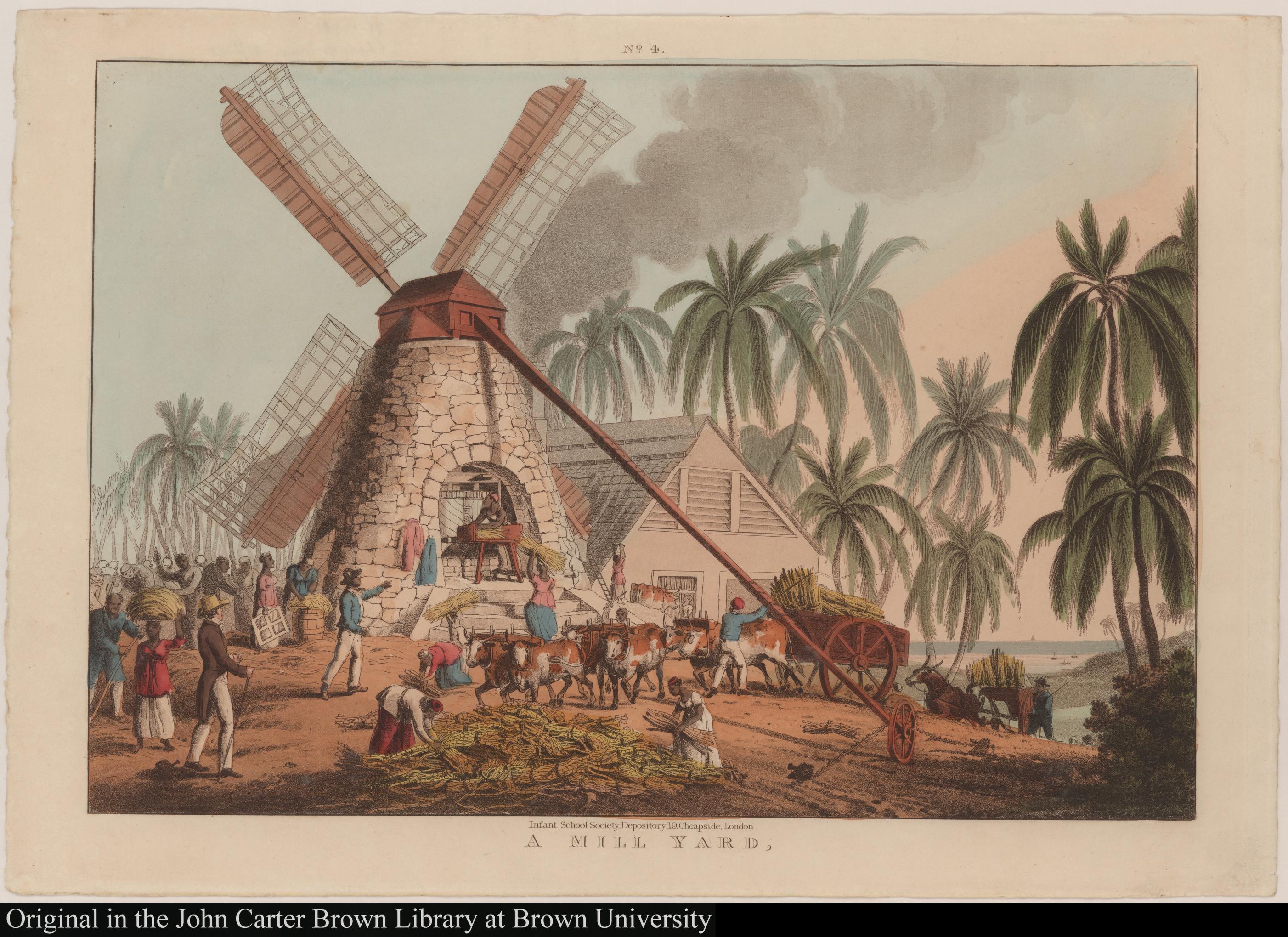 “A Mill Yard,” hand-colored lithograph in untitled folio published by the Ladies’ Society for Promoting the Early Education of Negro Children, London, [ca. 1833-37]. Copied from William Clark, Ten Views of the Island of Antigua, London, 1823, pl. 4.

VER. 168. Off the member snapt] This accident will sometimes happen, especially in the night: and the unfortunate wretch must fall a victim to his imprudence or sleepiness, if a hatchet do not immediately strike off the entangled member; or the mill be not instantly put out of the wind.16

Pere Labat says, he was informed the English were wont, as a punishment, thus to grind their negroes to death. But one may venture to affirm this punishment never had the sanction of law; and if any Englishman ever did grind his negroes to death, I will take upon me to aver, he was universally detested by his countrymen.

Indeed the bare suspicion of such a piece of barbarity leaves a stain: and therefore authors cannot be too cautious of admitting into their writings, any insinuation that bears hard on the humanity of a people.

Daily observation affords but too many proofs, where domestic slavery does not obtain, of the fatal consequences of indulged passion and revenge; but where one man is the absolute property of another, those passions may perhaps receive additional activity: planters, therefore, cannot be too much on their guard against the first sallies of passion; as by indulgence, passion, like a favourite, will at last grow independently powerful.

VER. 339. Open, and pervious] This also assists the christallization of the Sugar.

VER. 428. If too soon they strike,] When the Cane-juice is granulated sufficiently, which is known by the Sugar’s sticking to the ladle, and roping like a syrup, but breaking off from its edges; it is poured into a cooler, where, its surface being smoothed, the christallization is soon completed. This is called striking. The general precept is to temper high, and strike low. When the Muscovado is of a proper consistence, it is dug out of the cooler, and put into hogsheads; this is called potting. The casks being placed upon staunchions, the melasses drips from them into a cistern, made on purpose, below them, to receive it. The Sugar is sufficiently cured, when the hogshead rings upon being struck with a stick; and when the two canes, which are put into every cask, shew no melasses upon them, when drawn out of it.