At the beginning of Book III, James Grainger turns to the subject of crop time, the period in which sugarcane was harvested and processed. He portrays the enslaved laborers as happy to begin this work. But at line 55, an interesting thing happens: Grainger pivots to the subject of fire and imagines the cane field being set on fire, perhaps accidentally but also perhaps intentionally. Grainger does not specify whether the fire is caused by “the heavenly bolt” or by the “hand of malice;” nor does he specify who the arsonists might be. However, the fire at midnight might be the result of enslaved resistance on Caribbean plantations, since Grainger hints in Book II, line 123, that enslaved individuals would sometimes set fire to cane fields to avoid working in fields that had been infested with cowitch. In the footnote to this line, Grainger explains that cowitch is an “extraordinary vine [that] should not be permitted to grow in a Cane-piece; for Negroes have been known to fire the Canes, to save themselves from the torture which attends working in grounds where it has abounded.”

This excerpt about the fire at midnight not only shows that plantations were often vulnerable to catastrophes of fire and natural disasters but also hints at the tensions that existed between enslaved laborers and their enslavers. Fire was an essential element to the transformation of sugarcane into sugar: after being crushed, sugarcane had to be boiled to create a syrup, which was then crystallized to produce solid sugar. At the same time, fire could cause disasters and threaten to destroy the entire plantation, especially if it was deployed as a tool of rebellion.

As you read the below excerpts, think about how they depict fire. Does Grainger reach any conclusions about how the fire has started? How does he depict the reactions of enslaved laborers to the fire? How realistic is the portrayal of their reactions, given that they were being forced to work for their enslavers? What does this excerpt reveal about the relationship between natural forces and human beings on the plantation?

Note: Kathleen Donegan’s Seasons of Misery: Catastrophe and Colonial Settlement in Early America discusses the link between fire and rebellion in seventeenth-century Barbados. In Igniting the Caribbean’s Past: Fire in British West Indian History, Bonham C. Richardson points out that “All of the slave uprisings in the eastern Caribbean that preceded emancipation in the 1830s involved the use or planned use of fire” (31). 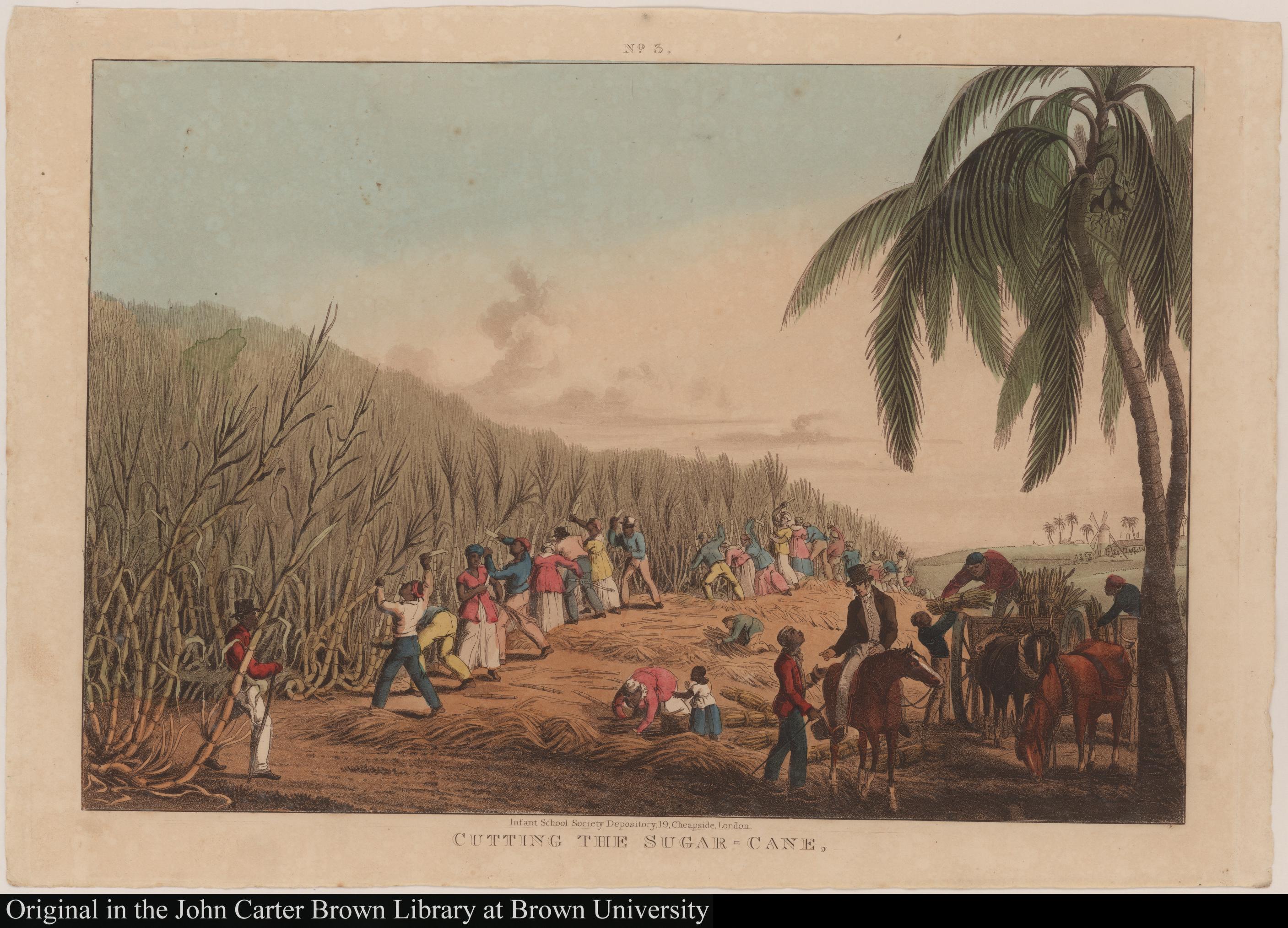 “Cutting the Sugar-Cane,” hand-colored lithograph in untitled folio published by the Ladies’ Society for Promoting the Early Education of Negro Children, London, [ca. 1833-37]. Copied from William Clark, Ten Views of the Island of Antigua, London, 1823, pl. 3.

VER. 81. And where thy dried Canes] The Cane-stalks which have been ground, are called Magoss; probably a corruption of the French word Bagasse,5 which signifies the same thing. They make an excellent fewel.